The IOC presented the winners of the 18th Mario Solinas Awards 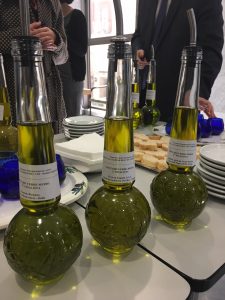 The International Olive Oil Council (IOC) has officially presented the winners and finalists of its Mario Solinas Awards for the quality of Extra Virgin Olive Oil, in which Goya® Organics Extra Virgin Olive Oil has been recognized as “the best green medium fruitiness in Spain”, ranking in the Top 5 world of this category.

As pointed out by the Executive Director of the IOC, Abdellatif Ghedira, these awards recognize the efforts of many producers around the world who have given the best of themselves, their land and their experience to offer us olive oils whose physical and chemical qualities Organoleptic properties have been carefully evaluated by qualified international experts.

The Mario Solinas Quality Awards was attended by a total of 189 extra virgin olive oils from Spain, Italy, Morocco, Portugal, Greece, Tunisia, Turkey, France, Brazil, China, and Croatia. Classified according to the intensity of the fruit, the olive oils in the contest have been scored on an evaluation sheet in which the olfactory, gustatory and retronasal sensations, as well as their harmony, complexity and persistence have been rated.

The Mario Solinas Awards ceremony will be held on 29 June 2018, during the Fancy Food Show in New York. In this way, according to the Deputy Executive Director of the IOC, Jaime Lillo “we recognize the value of the United States as the world’s largest importer of olive oil and one of the most important frameworks for the promotion of the agri-food industry in the world, reaffirming the concept of quality extra virgin olive oil, principle of the international competition of the IOC “.