Since its creation in 1974, Goya Spain has worked to satisfy the tastes and preferences of those who love Spanish and Latin American cuisine at a global level.

At the end of the 90´s, Goya Spain began a successful export trajectory taking his first steps in Nigeria, Poland and Libya. Today it reaches more than 20 markets. 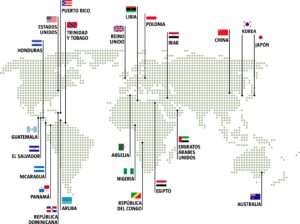 Thus, in 2011 Goya Spain began its first commercial plan with the priority objective of structuring and establishing its international expansion, defining the priority markets of China, Japan, Mexico, Brazil and Australia.

These five areas, in addition to our reference markets in North America, Central America, Europe and Africa (Nigeria), will serve as a strategic leverage point for developing the global expansion and coverage policy of the brand.

In Japan, the company began its operations in 2012 thanks to Brazilian product importer Imai Limited. In just four years, we were placed as a leading brand in olives of the retail distribution channel. We are currently with a consolidated presence.

In China, with annual imports of over 36 million litres of olive oil, of which 90% is Extra Virgin Olive Oil, Goya Spain has taken advantage of Spain’s excellent image in this market, prioritising its action on the modern retail distribution channel, in which the brand is established.